Denizli is a well-known Turkish resort town located in the south-west of the country, the center of the province of the same name. Near the town is Mount Karci. Translated from Turkish, the name of the city means “seaside”. And, although the distance to the nearest sea is 120 kilometers, the city received its name due to the large number of sources that flow into the Aksu River.

There are many places in Denizli that are worth visiting and seeing tourists. Now the city has become a rapidly developing economic and tourist center. The city combines historical monuments and modern buildings, natural sights and modern tourist destinations. Every tourist who came here, no doubt will find entertainment to your liking.

İçerik gizle
1 Denizli how to get there?
2 Denizli what to see?
2.1 Pamukkale Travertines
2.2 Akhan Caravanserai
2.3 Bagbasi City Forest

Denizli how to get there?

Getting to Denizli in the fastest way is by plane. The city has its own airport – Denizli Cardak Airport. Direct flights here are only from Istanbul. You can get from Cardak Airport to the center of Denizli by shuttle bus. Its schedule coincides with the arrival time of the aircraft. As for moving in the city, there are several options here too. The cheapest is the city bus. The transport infrastructure in the city is very well developed. You can reach any point of the city using buses. There is no metro or tram in the city. You can also use a taxi to move around the city or rent a car from rental companies in the city center.

Denizli what to see?

The famous snow-white thermal resort is known far beyond Turkey. His photographs can often be found on travel brochures. Without a doubt, Pamukkale has become one of the symbols of Turkey.

This amazing resort is located 20 km from Denizli. Pamukkale travertines are located in the valley of the Menderes River. Since 1988, travertines have been inscribed on the UNESCO World Heritage List. Groundwater, due to the unique composition, formed deposits of calcium of a bizarre form. They are visible for several kilometers thanks to the snow-white color. Each of the travertines is filled with thermal waters. Water temperature ranges from 35 to 100 degrees Celsius. The waters of the resort have a rejuvenating and healing effect. The resort is open to the public from 08:00 in the morning. Travertines are closed at 17:00 in the winter and at 21:00 in the summer.

Akhan Caravanserai is located at the entrance to the city at a distance of about 8 km. The caravan barn was built by the Seljuks Turks in 1253. It was the first safe place for lodging for caravans of merchants walking the Great Silk Road. We can say that this is the first hotel in the 12th century. In a large area of ​​the caravanserai, there is an inner courtyard where not only people but also animals could rest. Overnight in the caravanserai was completely free. Now the building is used as a museum, there is a modern hotel, cafes and souvenir shops. Surprisingly, this monument of architecture could arrive without any damage from the past to the present. It is preserved in its original form. 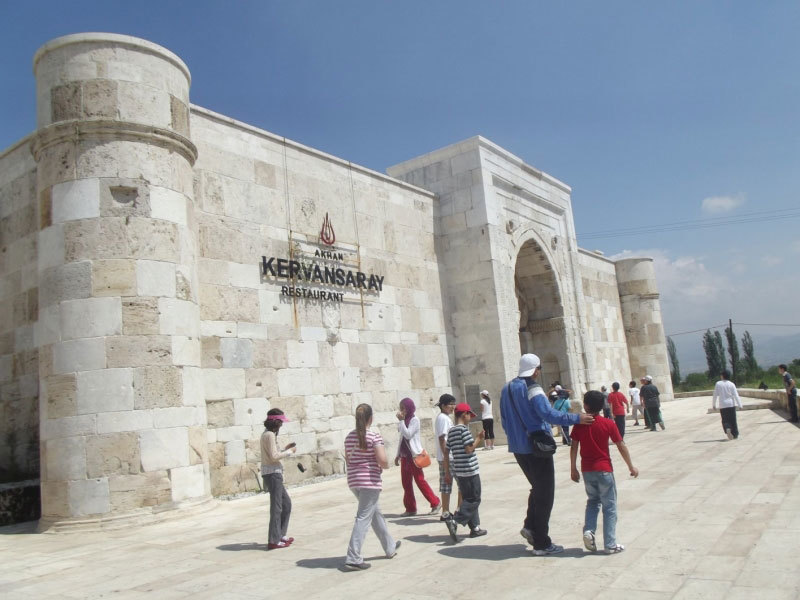 The forest is located 2 km from the city center and is of artificial origin. It was opened in 1984. The forest area is about 130 hectares. Many plants and trees grow here, including cedar, pistachio and cypress. This is a great place to relax from the stress of everyday life, to relax and spend time with your loved ones. There are two main trails in the city forest. The length of these trails is about 2 kilometers. In the forest there are also organized recreation areas, children’s and volleyball courts.