Kuala Lumpur is the cultural and financial capital of Malaysia. The city is one of the two capitals of the federal system of the country. The other capital where the country’s government is located is Putrajaya.

Kuala Lumpur is one of the most developed capitals of Southeast Asia. Locals call the city abbreviated KL. Translated from the Malay Kuala Lumpur means “muddy mouth, where there are two rivers.” The fact is that the city was founded where the Klang and Gombak rivers flow into a single stream, colored by tin deposits in a brown-gray color.

The population of the city is about 8 million people. The composition of the population is not homogeneous. In Kuala Lumpur, as well as in other Asian megalopolises, people of different religions and nationalities live and work. In particular, the KL live Malays, Indians, Chinese, and representatives of other Asian and European nations.

Kuala Lumpur How to Get There?

Kuala Lumpur is also a major transportation hub that connects a huge network of air flows. Most of the world’s leading airlines offer flights to Kuala Lumpur. On average, a flight from the European part of the world will take about 10 hours. From neighboring Singapore and Thailand to Kuala Lumpur can be reached by train or bus: it is fast and fairly cheap.

Kuala Lumpur is the most beautiful metropolis in South Asia. It combines modern and historical architecture, parks and historical sights, shopping and panoramic views from the skyscrapers. This is only a partial list of local tourist entertainment.

Below is a summary of some of the sights of Kuala Lumpur.

The most important indicator that Kuala Lumpur is on the list of world financial capitals along with Dubai, Hong Kong and New York are magnificent and majestic skyscrapers. Petronas Twin Towers are the best examples of these skyscrapers and part-time one of the main symbols of the city. Today, the main offices from the financial sector in Kuala Lumpur are located in Petronas Twin Towers. About 1.6 billion dollars was spent on building skyscrapers. In addition to the offices of the companies, these skyscrapers also have apartments for private individuals. If you want to admire a magnificent view of Kuala Lumpur, you can climb to the observation deck on the 86th floor. You can do this any day from Tuesday to Sunday from 09:00 to 21:00. On the observation deck there are souvenir shops and a restaurant. Also here is a cinema. The Sultan Abdul Samad Palace is located on Independence Square and is the second most popular attraction in Kuala Lumpur. The architecture of the palace combines elements of English and Oriental architecture. This creates a unique and recognizable appearance of the palace. In the center of the building stands a clock tower about 40 meters high. For many years the court was located in the palace. Today, the palace premises are occupied by the Ministry of Information, Communications and Culture of Malaysia. 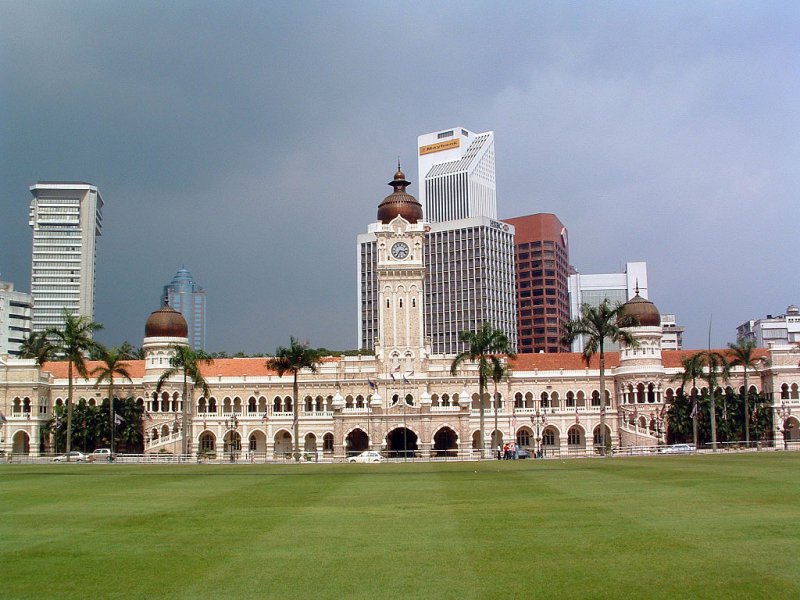 The Jamek Mosque, which seats a thousand people, was built in 1909. This is the oldest mosque in Kuala Lumpur. It is located at the intersection of the Klang and Gombak rivers. The architecture of the mosque is fully consistent with the eastern Moorish style. Interestingly, the architect was Briton Arthur Habbeck. The name Jamek means “a place where people gather to pray.” The mosque is still used for its intended purpose. It is important to note that tourists are forbidden to enter inside. They can only inspect the building outside. In addition, there is a strict dress code. Women should cover their heads and shoulders with a handkerchief. Men cannot appear here in short shorts and open T-shirts.