In addition to the usual beach holidays, most tourists want to get to know the culture and history of the country where they spend their holidays. In most cases, this choice is very justified, since visiting attractions promises a real adventure with the opportunity to touch the history. Therefore, if you have a vacation in France, be sure to visit the Saint-Michel d’Aiguilhe Chapel. This unique picturesque church, located on a lonely rock, will not leave anyone indifferent. Read more to find out how to get there and where to stay nearby.

How to get to Saint-Michel d’Aiguilhe Chapel

Saint-Michel d’Aiguilhe Chapel is located on a cliff in the village of Aiguilhe, which is located on the outskirts of Le Puy-en-Velay. It is from this city that the starting part of the pilgrimage routes to the church begins. You can get to the place both as part of a tourist group (you can buy a tour in advance at the hotel or tourist office), or on your own. The nearest airport is in Lyon. From here to Le Puy-en-Velay is about 175 km. A rock with a chapel is located at the end of Roche Street. To get to the chapel, you need to overcome 268 steep steps. Therefore, before attending church, make sure you have comfortable clothes and shoes.

Saint-Michel d’Aiguilhe Chapel is located on a cliff at an altitude of more than 80 meters in the picturesque French village of Aiguilhe. From the foot of the cliff to the top, 268 steps are carved into the cliff, overcoming which you will find yourself inside the ancient church.

The Chapel of St. Michel was built in 969 by order of the local Bishop of Puy. Interestingly, the chapel was built on the site of an ancient Roman temple to the god Mercury, who was here earlier.

Throughout the entire period of its existence, the chapel was completed; some of its parts were destroyed and reconstructed. However, the main part of the building remained unchanged. Inside the chapel, Christian frescoes are perfectly preserved on the walls. The facade of the chapel is decorated with mosaics and bas-reliefs. In the 20th century, archaeologists found religious artifacts in the chapel that had been hidden for a long time in a secret niche. Today you can see them right here in the chapel. 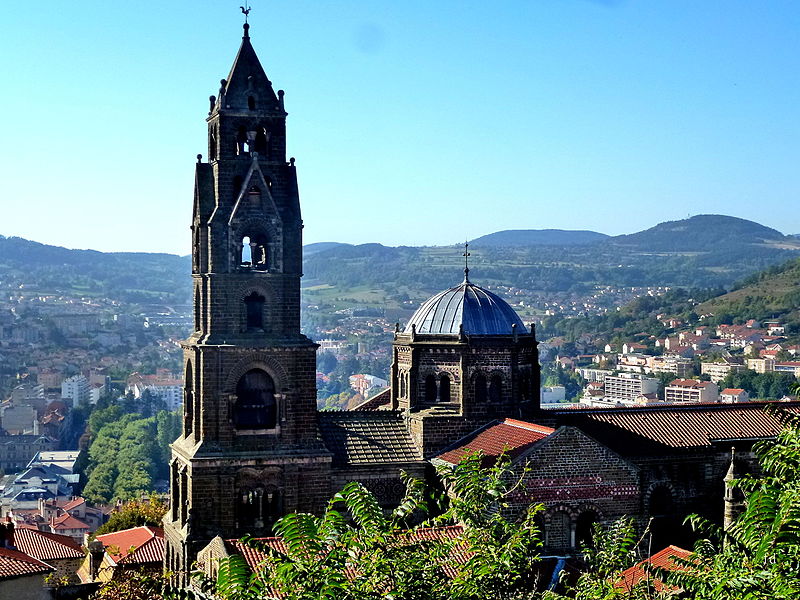 From the top of the cliff, on which the chapel is located, a bewitching view of the city and its surroundings opens. By the way, Christians believe that it was in the vicinity of the city of Le Puy-en-Velay that the Virgin Mary appeared to the world. Therefore, pilgrimage routes here are very frequent and popular.

If, after visiting the Saint-Michel d’Aiguilhe Chapel, you decide to stay nearby, here are a few nearby hotels:

İbis Budget Le Puy En Velay: The hotel is located directly opposite the train station, 200 meters from the historic city center. The rooms are equipped with everything necessary for a comfortable stay. Chapel of St. Michel is 1.6 km away. İbis Le Puy-en-Velay Centre: The hotel is located in the historic center of Le Puy-en-Velay. It features a 24-hour front desk, free Wi-Fi and an on-site restaurant, and rooms with mountain views.

Deltour Hotel Le Puy En Velay: The hotel opened its doors in 2008. It is located near the center and offers comfortable rooms with bathrooms and free Wi-Fi.