Santiago is the largest city and capital of Chile. Almost half of the country’s population lives here. In South America, on the outskirts of the Ant mountains on the banks of the Mapocho river is Santiago, whose population is more than 5 million people.

The city is named after St. John the Apostle. Santiago will charm you with magnificent beauty from the first minute. In Chile they speak a special dialect of Spanish. In capital of Chile, in addition to Spanish, they speak local languages-dialects-Mapudungun, Quechua, Aymara. City began to gain popularity among tourists after 1990. Since then, many bars, nightclubs, karaoke clubs, concert venues have appeared in the city, where tourists can come to have fun at night.

Santiago / Chile how to get there?

You don’t need a visa to visit Santiago. A direct flight to capital of Chile can take about 7-10 hours. Transit flights are operated with transfers in Paris and San Paulo. 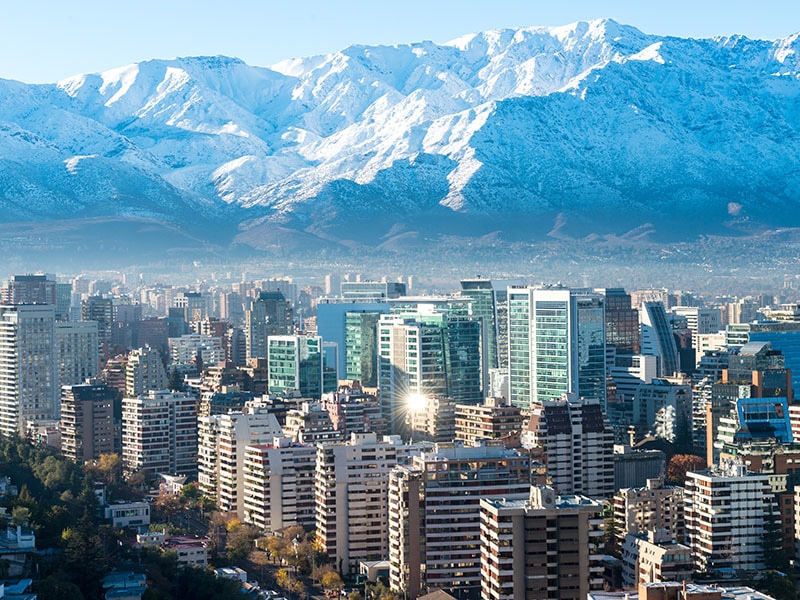 Santiago airport Arturo Merino Benitez international airport offers easy access to the city center. The developed network of bus connections within the city and the low cost of travel provides great convenience in moving. In city tourists can use taxis, minibuses or metro lines to get around the city.

Santiago was founded by Pedro de Valdivia on 12 February 1541. Every year in February at the top of Santa Lucia mountain this significant event is celebrated. The history of Chile began with the fact that the Spaniards who came with a dream to find gold here, found surprisingly fertile soil and quickly settled in Chile. After many civil wars in Chilean history, the political and economic field has reached stability in recent years.

Santiago is a magnificent city that is rich in attractions. We recommend you to start your trip around the city with Santiago Cathedral, which is also called the temple of the Sun. Sculptures, engravings, altars, tables in the Cathedral are certainly worthy of your attention.16 bells in the Cathedral of Santiago will enchant you with melody.

The next point of your trip can be Plaza de Armas, which is the oldest square in Santiago. It was built by Petro de Gamboa in 1541 and is now the meeting place of the townspeople. Plaza de Armas is home to the national Museum of Chile. The Museum presents unique works ranging from clothing to furniture.

If you want to see all aspects of Chilean history in Santiago, you should visit the Museum of Human Rights. Particularly striking to visitors is the part where the instruments of torture are exhibited. The archaeological Museum of Santiago also exhibits interesting finds from ancient times.

Cerro San Cristobal hill is one of the places where you can enjoy the magnificent views of Santiago. To reach the hill, use the cable car from Bellavista.

Santiago is divided into 5 districts, chosen by tourists for location: Providencia, Las Condes, Bellas Artes, Bellavista and El Bosque. You can choose any hotel located in these areas.

Hotel Atton El Bosque: you will be delighted with the rooms overlooking Santiago and you will be satisfied with the hotel offering luxurious rooms for its guests.

We wish you to have unforgettable memories of your trip to Santiago, Chile.