Transfiguration Church on the island of Kizhi in Russia is a unique museum-reserve, included in the UNESCO World Heritage List in three categories at once:

Everyone who is interested in Russian culture and architecture can visit it. The Kizhi Museum-Reserve, located on an island in Onega Lake, has the ability to relax and feel the unity with nature. In today’s post, you will learn about this amazing place, how to get there and where to stay.

How to get to Transfiguration Church, Kizhi

Transfiguration church is located on the island of Kizhi in Onega Lake, on the territory of the Kizhi Museum-Reserve. There are several ways to get here. To get from Petrozavodsk to the island of Kizhi, you can use small boats, which regularly depart from the marina of the city Water Station. This way is relevant only from May to September. In winter, when the lake freezes, you can go on a hovercraft or snowmobile. Also, at any time of the year, the MI-8 helicopter is available as transport. It is very expensive, but very unusual.

Kizhi Museum-Reserve is a unique open-air museum. On the territory of the island, there are 82 objects of architecture of the 18th century, and the Transfiguration Church is only one of the few, but the most recognizable buildings. The uniqueness of the church lies in its style and method of construction. It is difficult to imagine, but during the construction of the church, only two types of tools were used: an ax and a chisel, and of course human hands. Interestingly, the name of the architect and builder, scientists and historians have not been able to establish.

The church is the highest building of the island. You can see it from anywhere in the island. Its height is 37 meters. The church has 22 domes, and not a single nail was used during its construction. 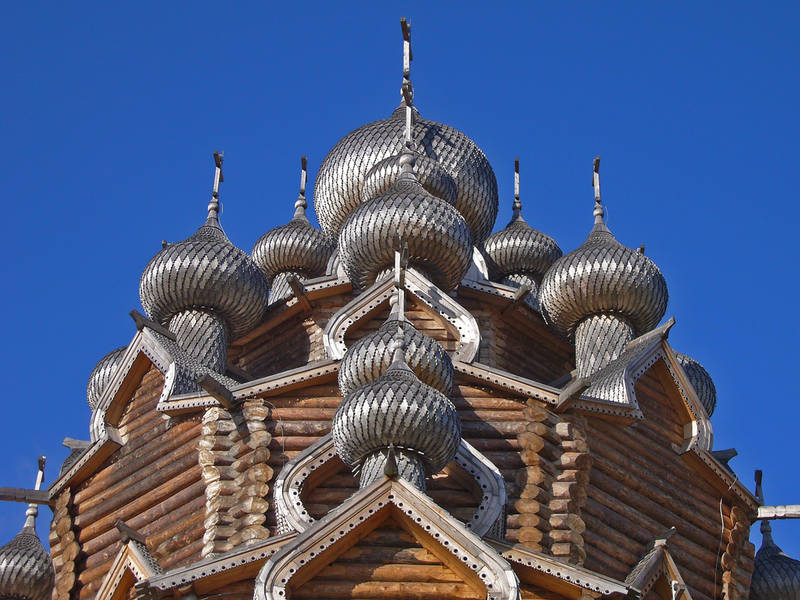 There are no hotels or hostels on Kizhi Island, as the whole island belongs to the conservation area. The nearest hotels are located on neighboring islands, most in the nearby city of Petrozavodsk. Here are some of them: